Communications over wireless medium are very appealing, because they enable mobility, however are special challenging due to the variation of the channel over the time and over frequency band. Channel is the physical medium that is used to send the signal from the transmitter to the receiver.

The radio link between the transmitter and receiver may vary from the ones where transmitter and receiver are in simply line of sight to the ones where the communication nodes are severely obstructed by the building, mountain etc. , and hence suffer from severe attenuation. Wireless channel are very different from the stationary and predictable wired channels because of their randomness and signal attenuation known as fading.

In the wireless medium, a signal can travel from a transmitter to a receiver over multiple reflective paths. This phenomenon is referred to as multipath propagation. There are several kinds of communication impairments that are typical of a wireless medium. Impairments may result mainly from multipath propagation, attenuation of signal power from large objects, relative motion between transmitter and receiver, interference, spreading of electromagnetic power and thermal noise. The nature of these impediments changes over time in unpredictable ways due to user movements causing fluctuation of the received signal. 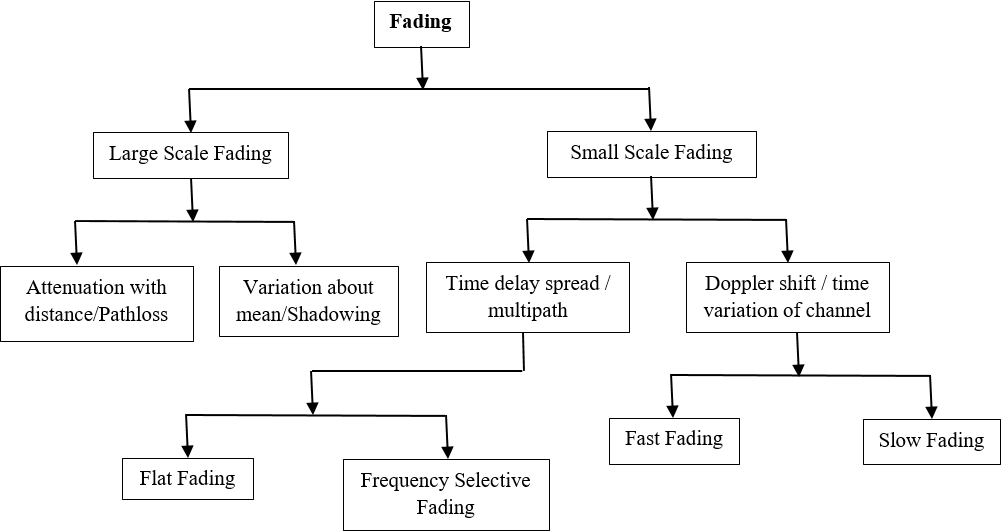 Large scale fading, refers to path loss caused by the effects of the signal traveling over large areas, and shadowing that is the effect fluctuating the received signal power  due to objects obstructing the propagation path between transmitter and receiver . These fluctuations are experienced on local-mean powers, that is, short-term averages to remove fluctuations due to multipath propagation.  Path loss may occur due to many effects, such as free-space loss, refraction, diffraction, reflection. Path loss is also influenced by terrain contours, environment (urban or rural, vegetation and foliage), propagation medium (dry or moist air), the distance between the transmitter and the receiver.

The distinction between slow and fast fading is important for the mathematical modeling of   fading channels and for the performance evaluation of communication systems operating over these channels. The fading is called fast if the coherence time  is much shorter than the delay requirement of the application, and slow if coherence time is longer. The operational significance of this definition is that, in a fast fading channel, one can transmit the coded symbols over multiple fades of the channel, while in a slow fading channel, one cannot. Thus, whether a channel is fast or slow fading depends not only on the environment but also on the application.