Popular Content Caching in 5G and Beyond Mobile Networks

With the increasing heavy traffic due to HD video transmission, virtual reality, Internet of Things (IoTs), it can be predicted that existing 4G LTE will not be enough to meet the demands that networks will face in near future. Hence, 5G technology is just about to replace the existing 4G LTE and hit the market hopefully by 2020. 5G technology will offer a network which will be more flexible, reliable and secure to connect people with all applications, services and things. The desired requirements for 5G are very high data rate, low latency, dense user with many connected devices, energy and cost efficiency and mobility. To ensure the desired high data rate, we have to move to millimetre wave (mmWave) band for wider bandwidth. The frequency bands that fall between 30 GHz to 300 GHz is known as the millimetre wave (mmWave) band. This is because the wavelength of electro-magnetic wave in this range is in the millimetre (1-10 mm) range. As the number of mobile data subscribers is increasing up day-by-day, the existing frequency allocation is unable to economically meet the expected high data rate and as a result a larger bandwidth is required. The existing bandwidth is limited in the available assigned frequency spectrum for 4G LTE that is below the mmWave band. So obviously the mobile operators have to explore mmWave as mobile frequency spectrum due to its ability of support a wider bandwidth. Before planning to deploy mmWave frequency band we need to go through its advantages and disadvantages for better understanding.

First we look into the benefits that can be achieved with mmWave band. As the bandwidth increases more active subscribers can be served. The coverage is not limited to line of sight as scattered or reflected paths are feasible. On the other hand the penetration loss is high in mmWave frequency band as they are unable to penetrate walls of buildings and other blockage. Moreover mmWave suffers from poor scattering and attenuation due to rain, fog/cloud and gas.

Distributed massive MIMO with 3D beamforming as a solution

Due to the poor scattering and high path loss characteristics, 3D-beamforming-aided directional transmission in distributed massive MIMO can be one the most promising solutions in both LoS and NLoS environments. 3D beamforming will give one extra dimension to extend the coverage to users at different heights and levels. The reason for moving towards massive MIMO is the deployment of mmWave for the 5G era. The size of a single antenna operating at high frequency will be extremely small and the aperture (usually half of the desired wavelength of carrier frequency) will also be small. To increase the signal strength at the receiver end, we need to increase the number of antennas at the transmitting end. In a distributed MIMO system, multiple access points (AP) are connected to a central server and the combined system operates as a large distributed multi-antenna access point. In future, the main challenges for wireless communication will be the immensely increasing number of users with various demands and the heterogeneous nature of the network serving many different smart gadgets. The Multi-Input-Multi Output (MIMO) wireless communication system provides several ways to transmit the information signal. Two of them are Spatial Multiplexing and Beamforming (BF). As the current cellular networks deployed so far, it is seen that the antenna elements at the base station (BS) or the access point are engaged along the horizontal axis to cover beam pattern radiation in the horizontal plane. This arrangement is known as 2D beamforming (2DBF). With the advancement of this technology, when the radiation beam pattern is directed in both the elevation and azimuth plane to provide more degrees of freedom, it adds one more dimension to the beamforming. This is called 3D beamforming. The 3DBF has many advantages such as higher user capacity, less intercell and inter sector interference, higher energy efficiency, improved coverage and increased spectral efficiency. 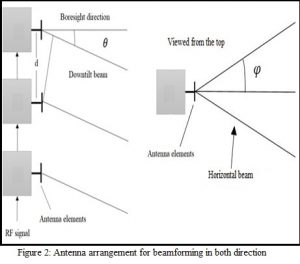 It has been seen that several factors need to be considered in implementing mmWave band for future wireless technologies as it gets attenuated by different elements of surrounding environments. My future works are aiming to provide solutions to this problem. For this, firstly we have been looking into directional beamforming using distributed planar antenna arrays in a line of sight (LoS) and multipath multi-user NLoS scenario.

We tested that in a line of sight environment first. In that proposed model we worked with three, five and ten distributed antenna arrays (10×10 each) within 50×50 m2 area at random positions respectively with a single UE at the centre. In 3D beamforming the beam is steerable in both azimuth and elevation angle. The transmitting antenna arrays are 1.5 metres in height and the UE is at 1 metre so the elevation is almost constant in every trial but we restricted the azimuth angle within +90 to -90. Because if the antenna arrays are not facing the UE then their contributions will be negligible. In a CDF graph it is seen that for LoS transmission in free space, increasing the number of antenna arrays increases the SNR values. Then we have observed the difference when the powers are combining coherently and non-coherently. When the signals are combining coherently the SNR values are improved by around 5 – 10 dB, depending on the number of arrays compared non-coherent combining.

Then we focused looking into an NLoS multipath model using the one ring scatterer model. We first started with one antenna array and a single UE. In this proposed model the UE is at the centre and 8 scatterers are on the circle surrounding the UE. We are looking into the distribution which is expected to be a Rician distribution because of the dominant path and the multipath. We will extend this multipath one ring scatterer model for multiuser and distributed antenna arrays. In this environment, there will be interference between users and we are thinking of using zero forcing beamforming for interference cancellation. We are also planning to determine how the spectral efficiency can be improved with distributed massive MIMO. 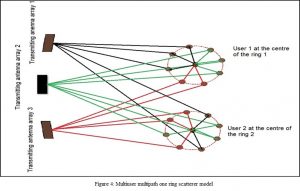