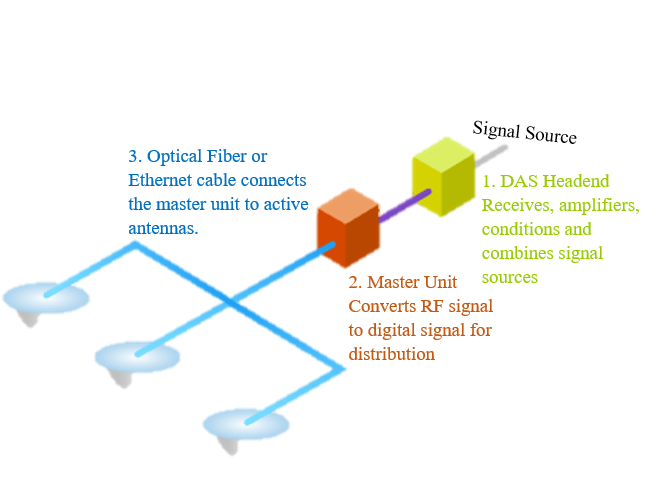 Ubiquitous coverage and high data rates are significant characteristics of future wireless systems. In traditional cellular systems, base-stations are located at the cell center to serve users, which are spatially distributed, across the cell. However, the dead spots within the cell caused by shadowing and penetration loss may significantly degrade the radio propagation strength of communication links, which in turn limit performance of the system. Such performance degradation is most severe for the cell-edge users who suffer from both weaker signal strength due to relatively longer propagation distance and stronger inter-cell interference.

DAS provides a solution for improving coverage and capacity of wireless cellular networks. Instead of deploying antennas centrally at the base-stations, by deploying remote antenna ports in coverage holes and connecting them with the home base- staion via dedicated high-speed backhaul links, DAS can effectively mitigate harmful effects such as shadowing and indoor penetration loss. The main advantage of DAS is to reduce the distance of a user to its nearest access point, so the received signal quality will improve. In this way, the performance of user in DAS is less sensitive to the location of user within each cell. 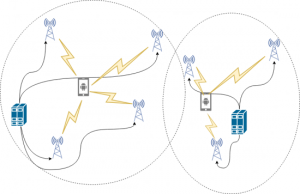 Fig.1 An illustration of the DAS

Figure 1 shows an example of the DAS layout, where antenna ports are randomly deployed within each cell boundary to serve users. Since the distributed antenna system  has the intrinsic features of high spectral efficiency, capacity, and data rate, the application of DAS has been a hot research area in recent years. DAS is basically proposed to provide high spectral efficiency and improve coverage of wireless communication systems. Benefits of DAS include reducing transmission power, outage probability, and most importantly, increasing capacity. At the same time, it provides high-quality coverage and low interference compared with centralized distributed systems.

The types of DAS can be generally classified into three different categories: Passive DAS, Active DAS, and Hybrid DAS. 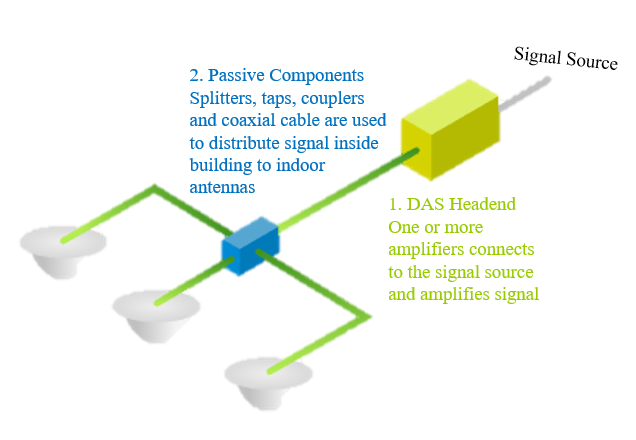 A passive DAS uses passive RF components such as coaxial cable, splitters, taps and couplers to distribute signal inside a building. Designing a passive DAS correctly requires calculating precise link budgets to make sure the outputted power at each antenna is equal. Since in Passive DAS, Analog-to-Digital Converters are not required the cost will be low. Passive DAS are typically simpler than other types of distributed antenna systems However, active or hybrid DAS systems for larger buildings often is recommended.

An Active DAS converts the analog radio frequency transmissions from the signal source to a digital signal for distribution. Actually, a master unit performs this analog-to- digital conversion. Once converted, the Active DAS transmits the digital signal over optical fiber or Ethernet cable to Remote Radio Units (RRUs) that convert the signal back to an analog signal. Unlike passive or hybrid systems, active systems do not use coaxial cable to distribute signal. Optical fiber or Ethernet cable runs straight to the antenna unit and conversion back to analog RF is done by circuitry inside the antenna.

Hybrid DAS combines  passive and active systems characteristics. The RRUs are separated from the antennas, allowing the system to use both optical fiber and coaxial cable to distribute signal throughout a building, Because this configuration requires fewer RRUs, a hybrid DAS normally costs less than an active DAS. A typical hybrid DAS configuration includes an RRU on each floor that converts from the digital signal to analog RF. The analog RF signal is connected to multiple antennas on that floor with coaxial cable. 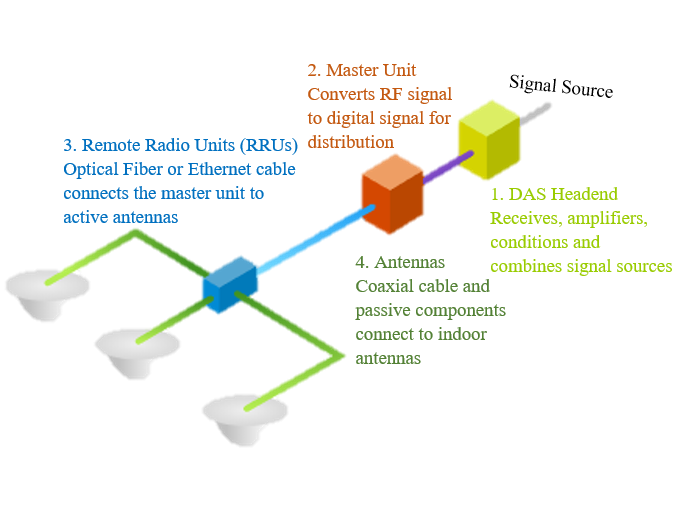 The DAS advantages present the following,

The disadvantages of DAS present the following,