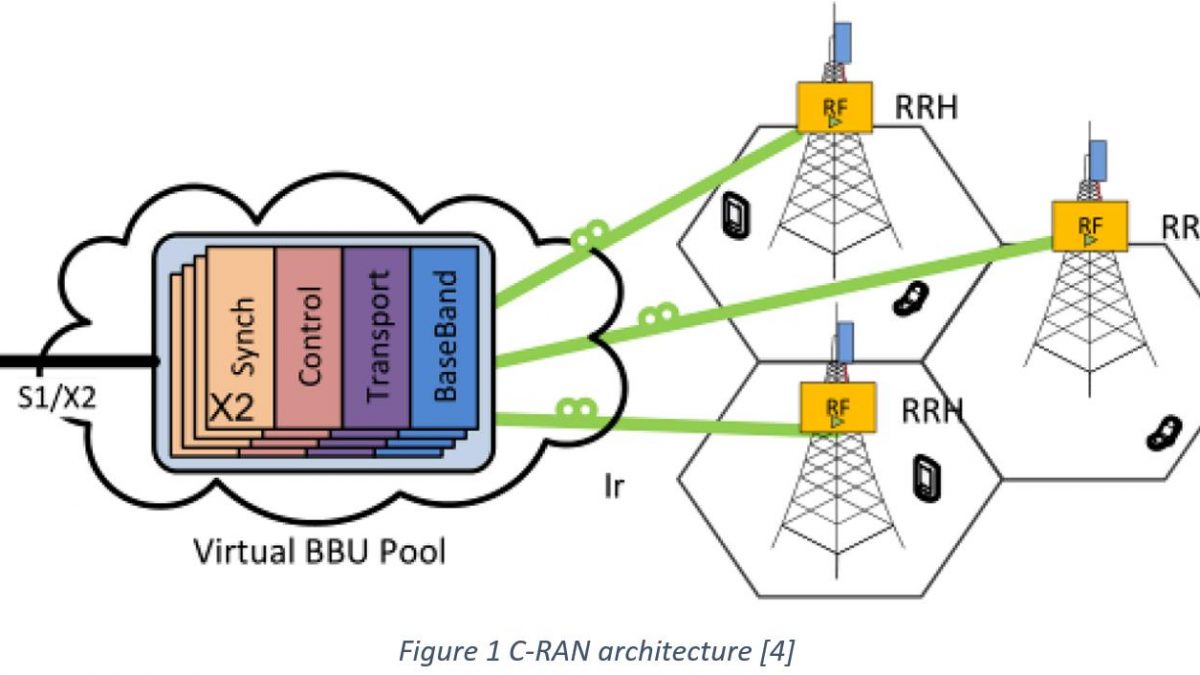 The C-RAN (Cloud, Centralized, and Co-operative Radio Access Network) architecture, firstly proposed by China Mobile in 2011 [1] will be one of the very important technologies in the 5G. In this network architecture, base station, known as eNodeB within the LTE network architecture, is disaggregated into two parts: the Radio Remote Unit (RRU) and the Base Band Unit (BBU). The separation is enabling different advantages, like the possibility of sharing baseband computing between numerous radio units, enabling in this way higher utilization, better energy efficiency, and reduced deployment costs. Together with listed advantages, the introduction of virtualizing techniques into the RAN is making sense like virtualization of BBU functions.

The C-RAN architecture can be decomposed into three main parts:

An example of C-RAN architecture is shown in Figure 1.

The current specifications for the way of deconstructing base stations into separated units of RRU and BBU are CPRI (Common Public Radio Interface) and OBSAI (Open Base Station Architecture Initiative). The main focus is on the CPRI, together with an enhanced version of it eCPRI, as they are used the most in the industry.

The CPRI specification is offering a functional split which is fully separating radio functions to RE (RRU) and all the other functions of the eNodeB protocol stack to the REC (BBU), making a high bandwidth data transportation request for the fronthaul network with the IQ data transportation (Figure 2). These characteristics of non-flexibility and high bandwidth demands are main drawbacks of CPRI approach.

The proposed solution to cope with CPRI disadvantages is given in the eCPRI, making the functional split less demanding by offering several split options shown in Figure 3. The blue and yellow shades are representing the portion of the functions that are located in each node, eREC or eRE. In this specific case, an example with inter-split is given, which is also one of the most interesting cases for Spotlight project as it is offering more flexibility for the technologies like MIMO by enabling for instance usage of CoMP techniques while demanding rational requests for the fronthaul network.

Although CPRI has been the main fronthaul interface standard, many operators started to question its suitability for the high bandwidth 5G use cases. For that reason, eCPRI is a more suitable candidate for 5G, being able to match the requirements of the 5G mobile networks. From Table 1, it becomes evident why the eCPRI’s inter-PHY layer splits are the main candidates for the 5G functional split. Reduction of fronthaul data by 10 to 50 times is important, while the support for E split remains.

Which functional split will be taken as a main one in the 5G technologies is still unclear, but the eCPRI solutions will be one of the main candidates as they are enabling much more flexibility of the functional split.

He received his BSc and MSc degrees from the University of Sarajevo, Faculty of Electrical Engineering Sarajevo, Department of Telecommunications. He was working in BS Telecom Solutions company in which he cooperated with network operators maintaining different telecommunication’s platforms. Currently, he is a Ph.D. student at the Polytechnic University of Milan, Department of Electronics, Information and Bioengineering in the area of Telecommunications and Early Stage Researcher at the European Marie Curie Innovative Training Network in the SPOTLIGHT project. His research area is covering Resource Management in Heterogeneous networks as well as an appliance of Machine learning and Big data analytics in the future 5G networks and beyond.