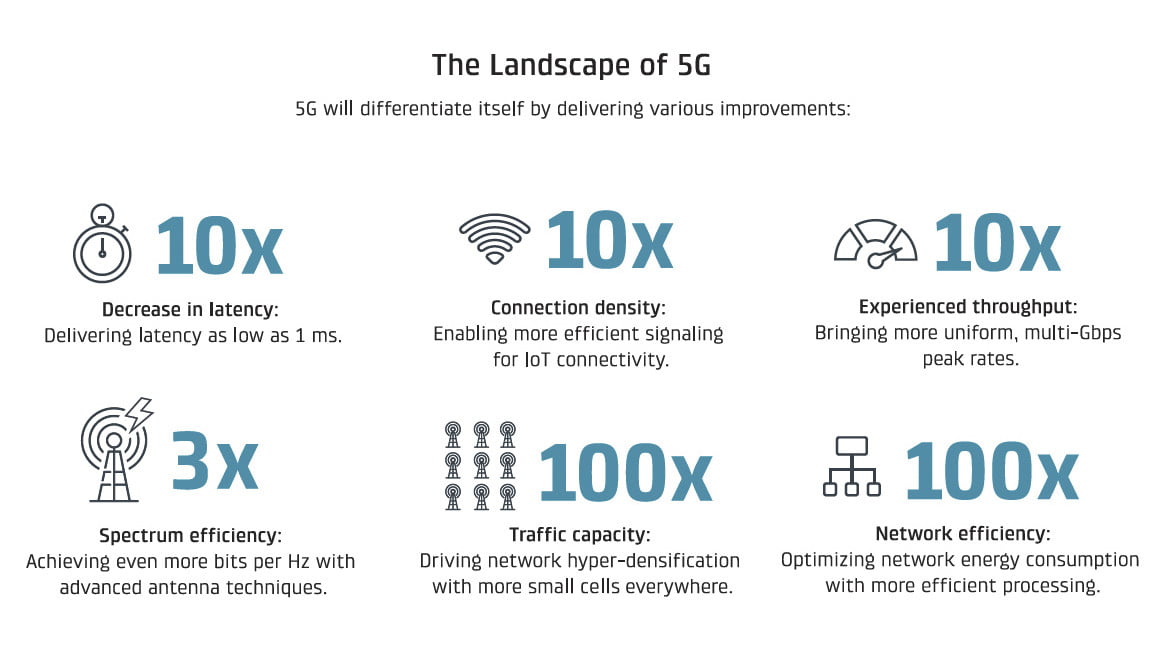 In this post, I will try to introduce you a little bit better into the upcoming 5G network. In general, the new generation of mobile networks is called 5G and it has a certain improvement in comparison with previous mobile networks. This mobile network is already tested in the real environment scenarios, apart from the laboratory tests, by several companies like Huawei, Samsung, and Vodafone.

The main goals of the 5G that it should satisfy as a technology can be listed into three groups:

To cope with all of these requests the 5G technology is introducing a set of changes in the mobile network from the radio to its core part. The first main difference is that the new radio interface is introduced in the 5G, which is using a higher frequency spectrum, well known as centimeter and millimeter waves. With this introduction, much higher data rates can be achieved, and a lot of new applications can be supported by mobile networks such as Virtual/Augmented Reality. On the other side, it is planned that the deployment of base stations will be much denser, which will enable users to higher data rates, lower latencies and higher reliability of service. Apart from these changes which are somehow close to the users, there are changes in the background of a 5G network, which are related to the core network of a network operator. This certain architectural shift in the 5G network is supporting a much higher number of connections, while from the other side the concept of “virtualizing everything” is followed, which directly influences the operator’s costs and maintenance of the networks.

All in all, for sure the 5G is bringing a lot of improvements in comparison with the previous mobile networks, but will it be able and will it be enough to support all the envisioned goals, it is yet to be seen in the next 10 years.

He received his BSc and MSc degrees from the University of Sarajevo, Faculty of Electrical Engineering Sarajevo, Department of Telecommunications. He was working in BS Telecom Solutions company in which he cooperated with network operators maintaining different telecommunication’s platforms. Currently, he is a Ph.D. student at the Polytechnic University of Milan, Department of Electronics, Information and Bioengineering in the area of Telecommunications and Early Stage Researcher at the European Marie Curie Innovative Training Network in the SPOTLIGHT project. His research area is covering Resource Management in Heterogeneous networks as well as an appliance of Machine learning and Big data analytics in the future 5G networks and beyond.